(Carlisle, PA):  The members of Cumberland County Republican Committee (CCRC) met on Saturday in New Kingstown and voted to endorse their 2022 candidates.  CCRC has chosen not to endorse candidates for Governor, Lieutenant Governor, or US Senate.  The committee has endorsed the following candidates:
Congress:    ​State Senator:   ​State Representative:    “Our endorsed candidates have a proven track record of putting the people and small businesses of Cumberland County first,” stated Lou Capozzi, Chairman of the Cumberland County Republican Committee. “CCRC is committed to doing everything possible to ensure we turn out the voters in November and get Republican candidates elected at every level of office.”

Sherri Chippo is an American Patriot having served our country in the United States Marine Corps, and has continued to serve our veterans through the Hampden Township Veterans Recognition Committee and the annual Marine Corps Banquet in Central PA.  Sherri is a professor at IUP, a leader in her community, and a public servant who is committed to making Hampden Township a great place to work and live. Anyone who knows Sherri would describe her as compassionate, truthful, hardworking, and fair-minded.

Yes, Commissioner Chippo was in Washington DC on January 6th peacefully protesting and exercising her First Amendment rights that she fought for. Thousands of other concerned citizens, including many from Cumberland County, marched on Washington that day and were NOT involved in the violence that took place.  For Democrats to slander Sherri's reputation when she did nothing wrong goes against everything that Democrats have historically fought for.
​
CCRC denounces these dirty campaign tactics by the Hampden Township Democrats and calls on Democrat candidates — Ryan Argot, Dave Fish and Jennifer Mangan — to denounce these tactics immediately! 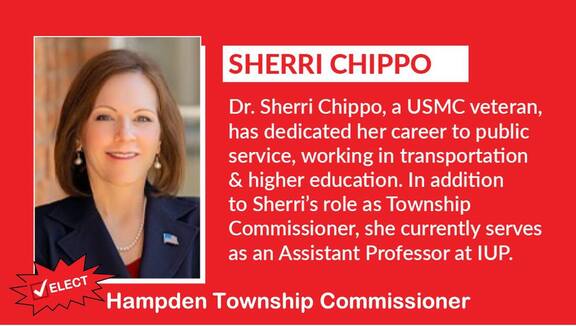 Violence, destruction, and rioting are never the solution to any political disagreement.  Last Wednesday’s events at the United States Capitol in no way reflect the values of the Republican Party or our values as a Committee.  The loss of life at Wednesday’s event is a travesty. It should not have happened. Though there is speculation about who initiated the actions that led to the violence, we abhor the behavior of any extremists who brought terror and carnage to the Capitol Building, a sacred place for all Americans.

While we denounce the violence that occurred last week, we voice our support for the thousands of PEACEFUL protestors, including two busloads of protestors from Cumberland County, who went to Washington, D.C. last Wednesday, on December 12, 2020, and on November 14, 2020, to raise awareness of the widespread fraud that occurred during the 2020 election.  These concerned citizens rallied for election reform, in hopes of encouraging our elected officials to investigate fraud and change the law accordingly.  We must not allow the extreme actions of a few to impact our party's long-standing reputation for expressing dissent in a peaceful and respectful manner.

We call on the Pennsylvania General Assembly to continue investigating election fraud and pass legislation that reforms the mail-in voting process.  We thank Cumberland County’s Congressmen Scott Perry and Dr. John Joyce who objected to certifying Pennsylvania’s electoral outcome.  We ask Congressional Democrats to work with Scott Perry, Dr. John Joyce, and other concerned members of Congress and address election fraud on a national level.  The citizens of Cumberland County, and citizens across the United States should have complete faith in the integrity of the election process. The 2020 election has highlighted real flaws in our election systems that our elected officials, on all levels of government, must work to reform. 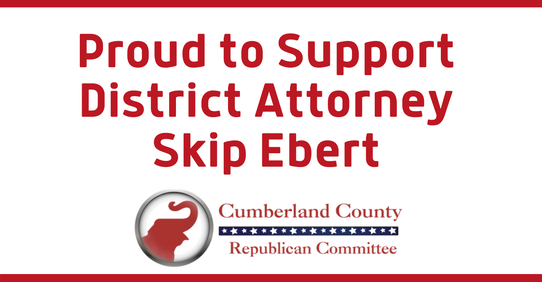 The Cumberland County Republican Committee (CCRC) unequivocally supports District Attorney Ebert, who has provided decades of exemplary service as a veteran, a Jurist and a District Attorney. His even-handed approach to all legal matters has never before been challenged and should not have been here.

The claims addressed in the August 31, 2020 article are typical of one-sided inflammatory political opportunism and misrepresentation by ANTIFA, BLM and uninformed Democrats at every level of government, which only serve to undermine the rule of law and the right to a fair trial, which the Democrats claim to support.

BLM is a Marxist/Anarchist cancel culture organization which foments violence, engages in extortionate threats to businesses and uses intimidation tactics and defamatory accusations to attempt to coerce and silence others’ First Amendment rights.

Republicans reject violence as an appropriate response, while acknowledging the inherent and inalienable right of self-defense. As Lincoln explained, “there is no grievance which is fit object for redress by mob law.”  We have a well-ordered legal process to ensure impartiality and non-discrimination.  While it is not perfect, it is a vast improvement over rioting, vigilantism and anarchy. It is a system built on the premise that All Lives Matter.

BLM flies under a false banner. If Black Lives Matter why is it that they only act on behalf of black men involved in criminal incidents? Why are they not protesting the daily violence against black children in our major cities? Why are they not organizing protests against the ANTIFA thugs ambushing and murdering Black police officers?  Why are they not in black communities seeking to improve others’ lives?  They are predictably quick to label every police involved incident as an incident of racism.  BLM has been around for years but has not accomplished anything or given one penny to the black community.

Truth is rarely found in a fog of self-interest and emotion. There are competing accounts and complicating factors in nearly every case.  District Attorney Ebert, unlike his colleagues in rioting Democrat run cities, was simply expressing the fact that cases are not as simple as presented through the filter of politicized media and social media. The Republican Committee of Cumberland County wholeheartedly endorses his statement, “the atmosphere right now is ‘something like this happens, let’s riot in the streets.’ Let’s just get some of the facts together, before we make that ultimate judgement.”

Cumberland County is a great place to live and has a solid legal system that treats each individual with civility and without prejudice. The Party of Lincoln shares MLK’s Dream of a community in which individuals are treated and have opportunities based on the content of their character and not the color of their skin. Neither BLM nor any other hatemongers have any place in our community. All hate and all unlawful violence should be condemned, regardless of where on the political spectrum it arises. District Attorney Ebert has spent a lifetime dedicated to preserving those truths, which should be self-evident.

While the Committee does not believe there was a basis for a story, based on the quoted statements contained in the article, it does recognize and appreciate that the Sentinel gave the District Attorney an opportunity to respond. It is disappointing that the Democrat Committee was contacted, but not the Republican Committee. This letter is submitted to allow balance in that regard.

Let the Citizens of Cumberland County get Back to Work
COVID-19 has turned our nation upside down and many citizens and small businesses in Cumberland County are now in dire financial distress.  Governor Wolf needs to stop his partisan antics, reach across the aisle to Republican lawmakers, and immediately open businesses that can operate while practicing necessary preventative measures to maintain a safe workplace.  These businesses will follow federal CDC guidelines that many states currently follow.  We demand that the Governor open Cumberland County for business NOW.

Governor Wolf’s policies have placed 1.5 million Pennsylvanians – nearly 30% of our workforce – out of work. This is unacceptable.  Pennsylvania has more unemployment claims than California and New York, the country’s two most populous states.  We cannot wait another three weeks for Governor Wolf to issue another edict that may or may not allow all businesses and employees to go back to work.

​Our Republican elected officials in Cumberland County led the way in appropriating funding for our health systems, sponsoring legislation to support our first responders, and passing Senate Bill 613 which would have allowed our economy to reopen.  The bill simply requested that the Commonwealth follow federal standards to allow businesses to reopen.  Unfortunately, Governor Wolf senselessly vetoed this legislation, thus holding Cumberland County’s citizens hostage and infringing upon their freedom to life, liberty, and the pursuit of happiness.

The Wolf Administration’s decision-making was arbitrary and unilaterally implemented by unelected bureaucrats, with no legislative input from our elected officials.   We request that Governor Wolf work with Republican lawmakers to act on the following issues:
We recognize the need for social distancing and other preventative measures in order to mitigate the virus’s spread, but our County’s citizens and small businesses are struggling and demanding the government address the problem, not BE the problem. 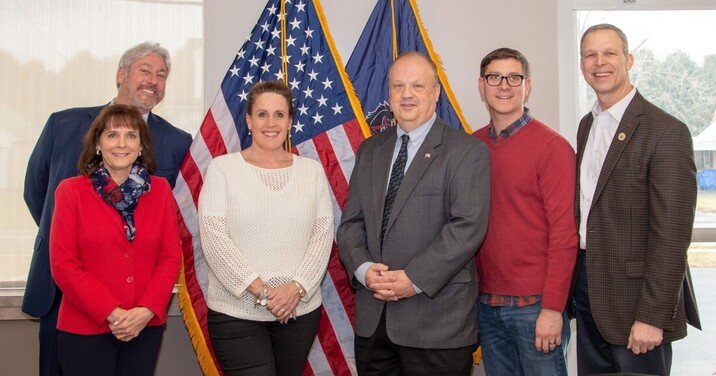 “The purchase of our headquarters is a historic event for our Committee”, stated Lou Capozzi, chairman of the Cumberland County Republican Committee.  “The headquarters will provide our volunteers and state, local and federal candidates with a centralized base of operations, which will in turn allow us to increase Republican representation at every level of government. This is an asset owned by the Cumberland County Republican Committee that everyone can be proud of.”

The Committee is planning a grand opening celebration and holiday party at The Republican House; more information on this event will follow. For more information about the Cumberland County Republican Committee, visit www.gopccpa.org.
The Carlisle Sentinel article "GOP buying new headquarters" 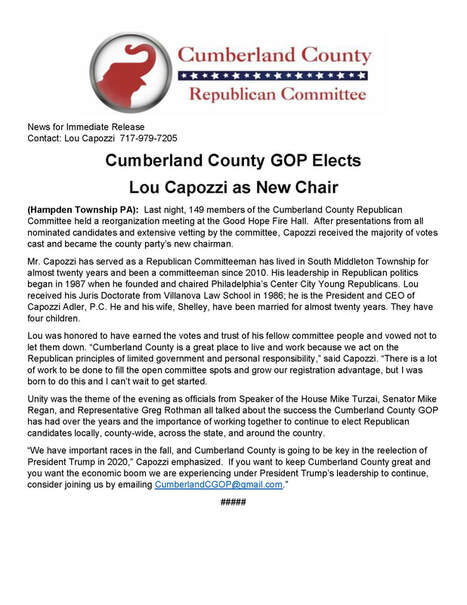